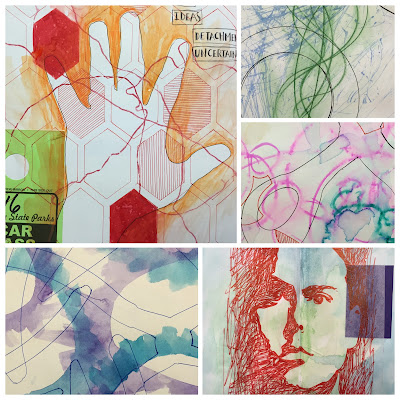 Tracing is often seen as “cheating”, and you may have been scolded by someone not to it. But tracing is a viable and valuable technique for including images in the journal. Besides stencils and templates, we often trace ordinary objects such as tools, rolls of tape, and scissors as a way to document our surroundings. We also trace our hands and the hands of friends and family as a way to record our connections with ourselves and with others. It’s a direct way to include people in our journaling process. We can even trace pictures and photographs as a way to include images that we may not want to take time and effort to draw in more conventional ways.

Focus on tracing things for at least 15 minutes today. Since we’ve focused already on stencils and templates, use ordinary objects like pliers, scissors, keys, or kitchen gadgets. Look for something that will give you an interesting and complex shape. You might also want to trace hands - yours and the people around you. If you have tracing paper, you can trace images and photographs. We like to use photos we have taken to keep the imagery as authentic as possible. Then you can glue the tracing into your journal. Look around to see what you have available for tracing, and experiment with using these items in your journal.

Just found your blog today and want to tell you how much I appreciate the time and effort you spend to create something of quality, something worth reading. You are so generous with your information and inspiration. Thank you for being here. Your ideas are terrific.

Carol, thank you so much. I am so glad that you found us. I hope we continue being inspirational.