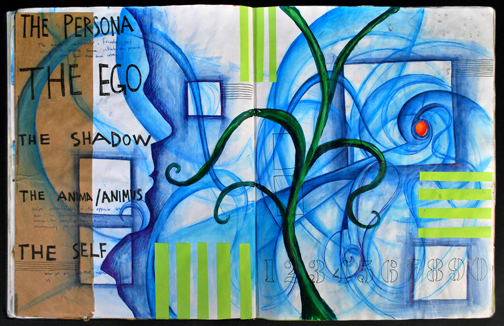 That might be a shock to those of you who know me. I have been described as boisterous, loud, and exuberant, as well as quiet, to myself, and shy. I’ve even been described as cerebral and outright goofy, but angry is not something that readily comes to mind when others describe me, and that is simply because I hide it, except occasionally when I lose my temper with my students. I hold in the anger, and unfortunately it gets vented when I am by myself as my temper flairs at the traffic around me, idiotic things that I read on the Internet, and even at my animals at times (though I never kick them). But while I’m around people and until that anger can be released, I boil and seethe. Here lately that anger has been a growing part of my imbalance.

Anger and frustration are part of my shadow - the dark side of my persona where I hide the socially unacceptable parts of myself. Carl Jung first came up with the idea of the shadow when he developed his archetypes. The shadow is where we hide the violent tendencies, the sexual desires, the impulses, and the thoughts that society deems inappropriate and taboo. We all have a shadow, but many of us deny and repress it. We push down this darkness and wear a mask that we present to others. This mask is what Jung called the Persona. It is a flat projection, and it is not who we really are. It is how we want others to see us.

My mask is one of joviality, humor, and good heartedness, but in my shadow is a lot of anger, frustration, fear, and resentment. I hide it there. Bury it there. But as long as I deny it, I can never be whole. I will only be the mask while all these negativities bubble under the surface threatening to crack open the mask.

A few years ago, I read Robert A. Johnson’s Owning Your Own Shadow, and it resonated with me. But in my unbalanced state as of late, it is clear that I do not own my shadow as the anger and frustration have been boiling to the surface more and more. It is a negativity that is wearing on me, and it is clear that with such negativity and hostility, I am not happy. I don’t want to be an angry person whose temper boils over, and I need a change.

I have just begun reading The Shadow Effect: Illuminating the Hidden Power of Your True Self by Deepak Chopra, Debbie Ford, and Marianne Williamson, and like Johnson’s book, it is really resonating with me. Though I have just begun, one idea has caught my attention. It is the idea of PROJECTION. In the first part of the book, Chopra talks about the shadow and how we live in a “fog of illusion”. He states that the only way to become whole is to acknowledge and accept the shadow. He describes how the emergence of negative emotions such as anger and anxiety are signs that we are projecting our fears and our anxieties onto others. So, when my temper flairs, usually at the selfishness, shortsightedness, and lack of consideration of others, I am projecting the anger that I feel towards myself for those same things.

And to be honest, I can be very selfish, shortsighted, and inconsiderate of others. I am a very solitary person, and it is hard for me to rely on others. I keep to myself, bottle up so much, and cringe when I am imposed upon. Not the best attributes for someone who, at the same time, longs for connection and human contact. And here is where I seek balance and wholeness. This is what this entire Change Initiative is about - a way to become whole.

In my quest for this balance, I must be honest with myself. I must confront these darker aspects of myself. I must learn to see the signs when my shadow lashes out. It is OK to feel anger, frustration, fear, and anxiety, but if I allow them to dominate my thoughts, I cling to feelings of righteousness and superiority - feelings of “us vs. them”. I give into the shadow and perpetuate my suffering. The shadow takes over, and I forget the joy, the happiness, and only resentment and the feeling that “they're out to get me" remain.

I think this is really deep. Great to bring forward. Hope you find peace! killer

Your posts lately are incredibly powerful. You obviously have a lot to get out! Brave soul, you are, and I for one am glad you are sharing. hugs, Bean

Killer, it's the goal of this new initiative to find balance and to ultimately find peace of mind. It seems to be working so far. Peace is something that is in very short supply in our day and age.

Erin, as always I appreciate your comments. I don't know if it's brave or not to be posting these thoughts, and I hope that people are turned off by them. But they are things that have been weighing on me, and I hope that others find my words beneficial. I want to change the world, but I must first start with myself.

thats the downside of being a creative person. ask me how I know. Seeing your words, its as if I wrote this page my self. I have been doing EFT tapping exercises. that seems to work the best out of everything that and just taking a few minutes outside away from every thing. And when i feel angry sad and depressed I say self I only feel this way because of blah blah blah fear blah blah . and I feel way better.

EFT tapping sounds interesting. I'll have to look into it.

I think it's all about catching yourself in the moment when the temper boils, the anxiety overwhelms, or the fear catches hold, and see it for what it is - projection. I have found that lately, I have been less angry. I seem to be finding my balance.

I agree with 'Anon', I could have written your post word for word. I feel just how you describe. The only difference is that I fought depression for many years (from puberty until I gave birth- 20 years) and while I've not been in a depressive state for 10 years now, I still find it very difficult to scrape into that dark place for fear that she'll return. As though any scraping or fooling around into things like 'anger' or 'self-consiousnesss' might bring back all that heavy dark again. Yet the feeling to be the vibrant person you describe is very strong though and I bet one of these days she'll break out and force change for the better. Thank you for sharing your struggle with us. You are very honest and true to your feelings - not something seen too much now-a-days in this too PC world. Thanks again