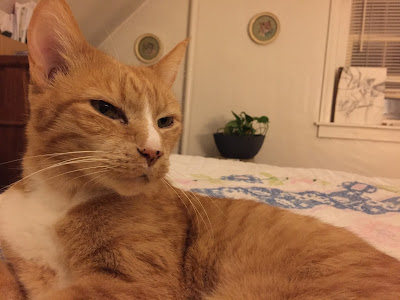 Our hearts have been very heavy the past few days. We had to say goodbye to sweet kitty boy Aloysius. He was only fourteen years old, but he had been losing weight for quite sometime. The frustrating thing was we could never figure out what was wrong. All the tests came back relatively normal. We tried many different things to get him to eat and put on weight, but he took a turn for the worse this week. 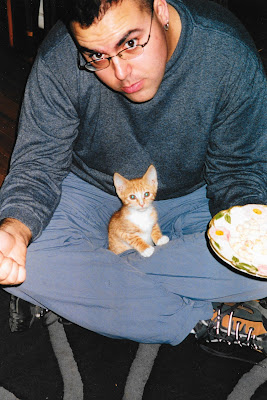 Aloysius was one of our first fosters from the Loudoun County Animal Shelter along with his two brothers. Since they were the first, my wife gave them names that began with A, B, and C. I don't remember what they were, and I quickly made the suggestion of ostentatious names just to be silly. We began calling them Aloysius, Bartholomew, and Cromwell. Of course, Aloysius stuck. 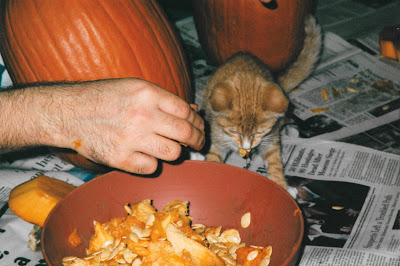 Being an orange tabby, Aloysius was full of personality, and we quickly fell in love. We decided to adopt him at my suggestion, and his brothers went back to the shelter to find their forever homes. A couple of my favorite memories from his mischievous kitten years were eating pumpkin innards while carving jack-o-lanterns (above) and the way he sat in my hand because he was an itty bitty kitty (below). 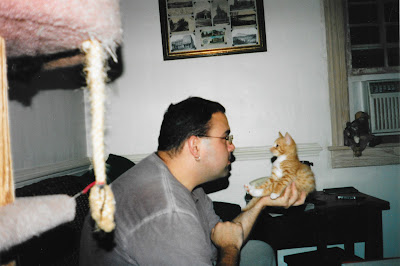 Aloysius would come to have many nicknames. Squishy was probably the one we used the most because he was just a squishy kitty. You could pick him up, hold him, and snuggle him, and he just seemed to squish this way and that. But we often called him Squishy-wishy-roo-roo, Wish, Squsih, or Roo. He never lost his orange tabby personality, and he was a bit of a stinker up until the end. If you don't know what I mean by orange tabby personality, then you probably never lived with one. I highly recommend having one in your life. 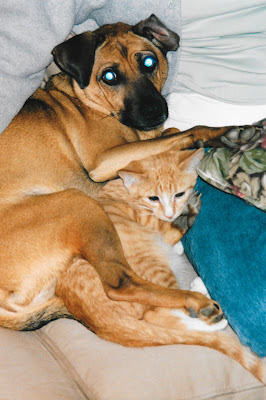 We always had other cats in the house, but Squishy always hung out with the dogs. I swear he thought he was a dog, and he would snuggle a lot with our dog Poi (above) and play with our big shepherd-chow mix Percy.

In the end, our good friend Krisi Erwin of Wholistic Paws helped Squishy to the Rainbow Bridge. He was a special little cat, and we miss him terribly. The house feels so much emptier without him.
Posted by Eric

So sorry for your loss Eric. Our furbabies are forever etched on our hearts and in our lives and we feel so much loss and bereavement when one leaves us. You and your wife will be in my thoughts and prayers as you readjust after this loss.