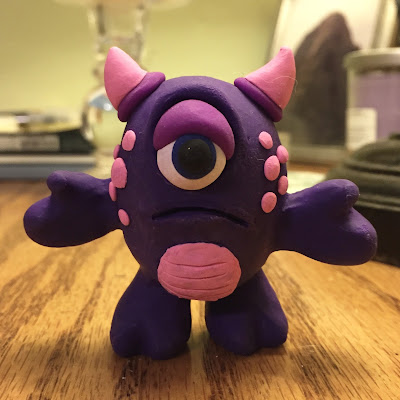 Well my first attempts at polymer clay monsters this weekend weren't as successful as I would have liked. Although I've done a lot with ceramic clay and Model Magic over the years, I have never used polymer clay, and it does have a bit of a learning curve. First of all, it took a while to get use to the clay. I first tried Sculpey III, but I felt like it was a little too soft, so I tried Premo Sculpey, and Fimo. Each of these has their own issues, but after a while I began to catch onto the clay, and feel like my later attempts were more successful as I figured out how to best use the clay.

Then there's my attempt at baking the clay. My first attempt at baking ended in three of the four pieces cracking - one had only a slight crack, but the other two had significant cracks. Only the purple guy above survived. But after following some advice someone gave me on Facebook (Thanks, Glaucia), I was more successful. I ended up with six that survived out of ten. I'm thinking that my success rate will go up as I make more. Depending on how many more I make, I might have to put some for sale on the website. I'll share more of the monsters over the next few days.
Posted by Eric