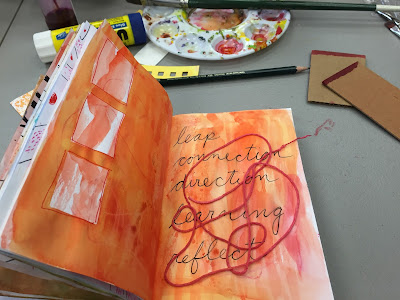 With a little trepidation and nervousness, I put in my formal resignation yesterday, so at the end of my contract, I will no longer be a teacher for Loudoun County Public Schools in Northern Virginia. I'll be a full time artist.

Up until this point, I have only declared my intention of stepping away from teaching, but now I have begun the actual stepping away process. Although I have six weeks left in the school year, my contract is officially up in mid August, which means that I'll have a couple of months over the summer to get adjusted to the idea of being a full time artist. It hasn't really sunk in yet. It's such a monumental decision for me, but I don't think it will really hit me until the fall when the new school year begins, and I won't be going back.

I just have to figure out a way to make a living at it.

Dave and I already have a number of things lined up for the summer and the fall, including teaching workshops at Art Unraveled in Phoenix at the beginning of August and Art and Soul in Virginia Beach at the end of September. We'll also be keynote speakers at a couple of different state art education conferences.

I've also got ideas for some local workshops and events, and I have some notions for more online workshops. I would love to travel and teach at other venues, so I definitely need some help in finding studios and art stores where I can teach workshops, so if you know of a place, let me know.

I guess there's no turning back now, and I would't want to even if I could. Here's to taking the leap and taking flight.
Posted by Eric

Congratulations! You will make this work as you have the books and other ventures you have attempted.

Good Luck! You are going to rock being an artist, because you already do rock it!

Best wishes on what the next chapter will reveal! Set forth your intentions to the universe and watch for the opportunities to unfold before you

Congratulations! Now get to work!

Thank you all, so much. I really appreciate the encouragement and support.