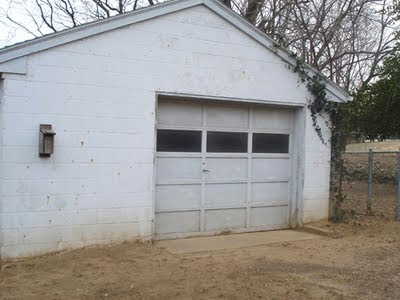 I am finally finding a little time to post about my new studio space. For the last nine years, my studio has been sharing space with the guest bedroom in our house. It was a tiny room that often became a mess that had to be cleaned up when we had guests. As mentioned in a previous post, once I was accepted into the Western Loudoun Artist Studio Tour, I spent a lot of time converting my garage into a viable art space. After all the work, I decided to keep it as a permanent studio to the delight of my wife. The above image was taken during the winter, when I first began cleaning out the garage preparing to apply to the tour. The photo below shows the cleaned out garage, but far from being in a state for a studio. 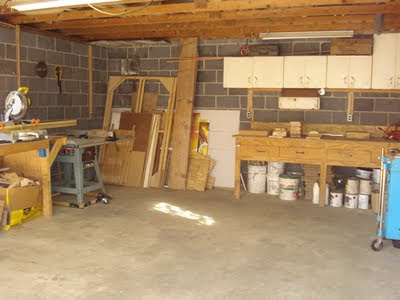 Once the weather turned warmer, I began purging a lot of junk that had accumulated in the garage, and I made multiple trips to the dump. Look at all that stuff under the work benches - most of it is gone now or at least stored in the back shed. I cleaned, I purged, I painted, and I cleaned some more. I moved all the lawn and gardening equipment, bags, and tools out to a shed in the backyard, and began to move studio stuff in. I planted grass seed in the backyard as well as around the garage, and my wife did a lot of gardening around the entire house to get everything ready for the tour. We even had the driveway redone with new drains and new gravel. Check out the photo below to see how the new grass, new gravel, new plants, and the general onset of spring transformed the exterior. I would still love to paint the outside of the garage. 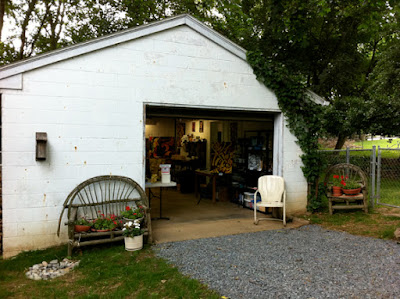 Inside I painted all the walls white, put up new lights, and brought out all of my artwork and all of my studio materials and equipment. I put in an air conditioner, bought a couple of tables and chairs, and organized and displayed all of my artwork for the tour. The photo below shows the studio set up and ready to go for the tour. The other photos show the set up throughout the studio. 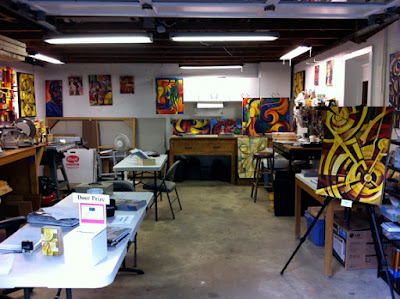 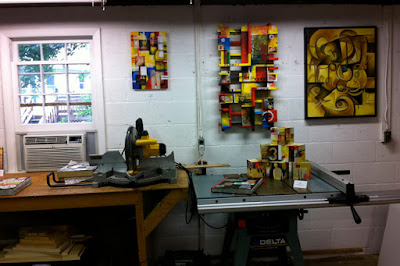 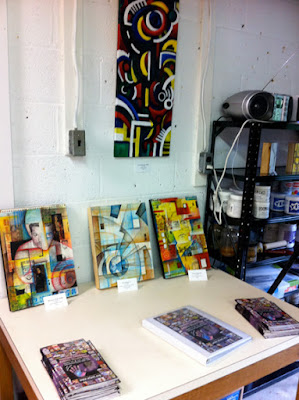 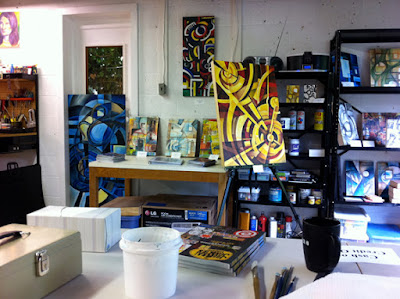 The tour went very well, and I had quite a few people pass through both days. I sold some art, some prints, and a lot of books. The journals were a huge hit, and many people were very interested. Since the tour, I've been trying to organize the studio into more of a working space. I've brought out pretty much all of my art materials, artwork, books, and such from the house. I moved a set of selves from the old studio to the new and got rid of the two black shelves that can be seen in the right hand part of the above photo. I still have a lot of organizing and cleaning to do, but soon, I'll have the transition complete, and all remnants of the old studio will be gone from the guest bedroom.

I can't wait to get producing in the new space.
Posted by Eric

In the early Spring, I stumbled across what is now my Hidden Oasis. Using a palette knife only, I painted this into my journal. It's a tree, by a bend in the river. Wish I could share it!

very cool. I'd love to see your studio in person. The assemblage on the wall looks very interesting, could you post a close-up shot of that? is it made of wood?

Congrats! I would give anything to have my own outside away from the house studio. Go glad for you!

This is awesome! Someday I hope to have somewhere that is solely used to work. I love your artistic style, by the way.

dude this is awesome! I love it!