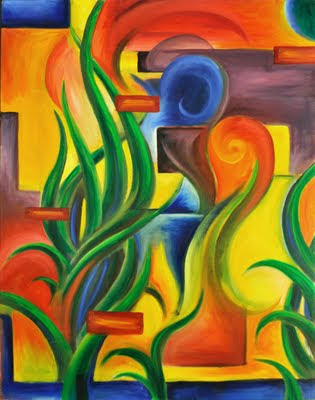 While cleaning out my crawl space looking for older artwork to include on the Western Loudoun Artists Studio Tour, I discovered these six pieces. All are from 2001 and 2002, and all are oil on canvas. The first three were completed during a graduate painting class that I was taking at the time, and I had just gotten into the visual journal. The painting above was from an idea that showed up in one of my first journals. The visual journal profoundly influenced my painting. Before coming to the journal, my paintings had very dark and muted color, and they were nearly always figurative. 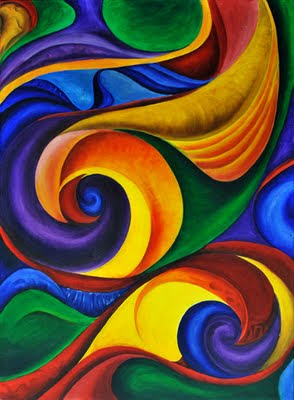 The journal brought color into my art, and allowed me to explore more abstract and non-objective work. The painting above was a direct result of the swirling, spiraling images that I was exploring in my journal. Since I never signed the work, I'm not certain which side is the top. I wonder what it would look like flipped.

Near the end of the class, I wanted to bring the color that I had been exploring into more representational imagery. I referenced a photograph of some old machinery near an oil well at my parents house in the above painting. I never really finished this painting, and I was never really happy with it.

The two paintings above were done independently, and I brought together some of the figurative work that I had been doing at the time and the color that I had been exploring in my class.

This final painting was from another graduate painting class the following year. I began the class working abstractly and non-representationally, but soon turned to portraits, something that I have explored since I was a teenager. I applied what I had learned with color, and focused on expressive brushwork and odd croppings. This self-portrait is, by far, my favorite painting from the time.

I am fascinated to see how much my art has changed over the last ten years. I work with a variety of water based media now, and my imagery has evolved and changed. The one thing that has stayed constant has been the exploration of self. No matter the material or the imagery, I have always looked within and tried to express the soft vulnerable truths hidden there.

The studio tour is in about a week, the weekend of June 11 and 12, from 10 AM to 5 PM each day. If you are in the Purcellville, VA area that weekend, stop by my studio to see these pieces, and much, much more.

Such vivid color. I don't know how you achieve it. My colors are never that vivid. Beautiful work, even if it's older pieces.

Good luck with the tour. Wish I lived closer, I would love to see everything in person. I hope it's a real success!

I LOVE THESE!!!!
The colors just sing to me! Wow! The second one is my favorite, but they are all sooooo coool!
Lotus