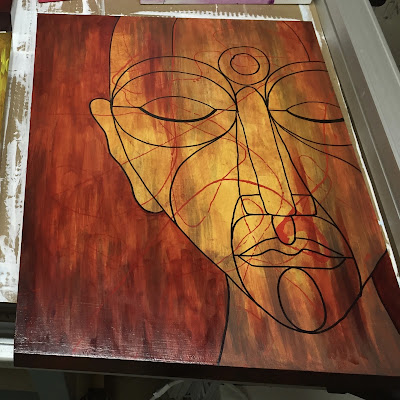 I found some time to work in the studio tonight, and I decided to attack one of my larger panels. Back in February, I built and gessoed a few cradled panels including this 18"x24". I applied several layers of Golden High Flow Acrylic, and it sat for a couple of months. My plan was to do one of my faces on it, but I had simply been putting it off.

Tonight, I decided that I had put it off long enough, so I dove in with my thick, black paint marker and drew the face. It's a different experience drawing on on this large surface than it is drawing the face on the smaller 4"x6" pieces I have done before. After the black lines, I wanted to pull the face out from the background, so I laid in a layer of alizarin crimson in the negative spaces. I still want to play with the line thickness, and I want to add some patterns with black and white paint marker. It's a ways from being finished, but I am liking how it's turning out so far.

The High Flow Acrylic has quite the gloss when it dries so I had to shoot the photo at an strange angle.
Posted by Eric