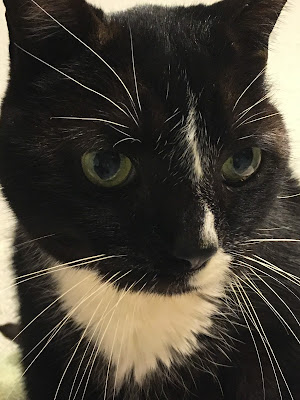 We had to say good bye to our sweet boy Oreo last night. His health had been steadily failing over the past few months. He wasn't eating much, he was losing weight, he just wasn't himself, and it was just time. We didn't want him to suffer anymore.

Oreo came to us about 15 years ago as a two year old boy who had been urinating inappropriately in his home. His family at the time thought that he might do better in our home, and he did. His problem diminished but never went completely away, but we adjusted. He was a very sweet boy, and he loved nothing more than cuddling on your lap, though he was not by any means a petite boy. But as a way to invite him up, you had to sing his song. Some how we began simply singing his name to the tune of the song the witch's guards sing in the Wizard of Oz. I'm not sure where it came from, but years later when we heard the exact same thing in the movie Wreck It Ralph, we realized that we weren't the only ones to think of it.

At some point, he developed lymphoma. We were able to treat it, and he lived quite a few years. In the end we believe that the lymphoma came back and led to his failing health. We watched as he lost weight, developed difficulty walking, and lost that spark in his eyes. Our friend and veterinarian, Krisi Erwin helped him to the bridge, and we are grateful for her support and reassurance through the end of Oreo's life.

The house seems emptier without our sweet boy, but our spirits are lifted a little by the thought that he is no longer suffering.

Goodbye, Oreo. We will miss you.
Posted by Eric