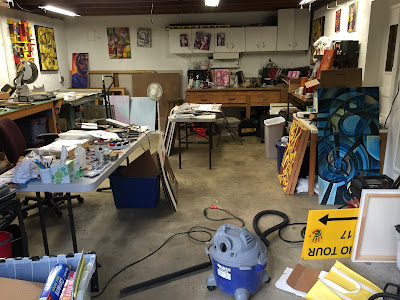 Over the last week, I've been sorting, cleaning, organizing, and purging a lot of stuff in my classroom, and I've been able to let go of a lot things from my 20 years of teaching. That letting go has carried over to my studio as well, as I have been getting the studio ready for next weekend's Western Loudoun Artists Studio Tour. I've been sorting and purging a lot of stuff from the studio - old artwork, old supplies, old fodder - as I have been cleaning and organizing. I've worked quite a number of hours, and still have a long way to go. The photo above was taken last night after spending a few hours working. I did even more today, and the studio is a complete shambles. Slowly, though, I am getting it put back together.

Even though the Studio Tour is a great motivation to clean and organize the studio, it goes deeper than just trying to get ready for next weekend. It's about getting ready to make the transition into a new chapter of my life, and I am looking to declutter, to simplify, and to let go. It's a new beginning, and I want to make a fresh start. I don't want to let the things of the past clutter the life that I am living now. So, if I haven't used something in a couple of years, if something doesn't serve a purpose for my life now, I'm letting it go.

I still have a ways to go, but the studio will be ready for next Saturday.
Posted by Eric

I have always found those time when I clear clutter and 'destash', I come away more inspired and energized. I just wish I was there to go through your trash sacks!

Need To Increase Your ClickBank Banner Commissions And Traffic?