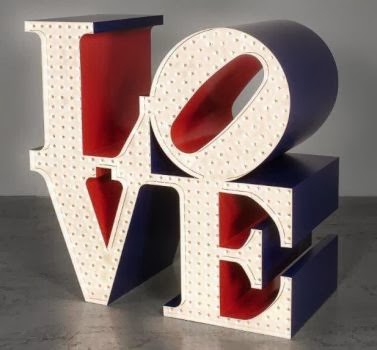 We just returned from a trip to San Antonio, TX where we worked with private school Saint Mary's Hall and the McNay Art Museum. It was quite a trip, and we want to thank Carol Parker from SMH and Rosemary Hickman from the McNay for organizing the visit.

At Saint Mary's Hall, we worked with a variety of middle school and high school art classes and presented to the entire high school. At the McNay we worked with about 70 educators during an Evening for Educators where we were keynote speakers and workshop presenters. We had a good time at both places, and appreciate the chance to spread the journal love.

Our time at the McNay coincided with the opening of three Robert Indiana exhibits, and Dave and I spent a lot of time in the large retrospective of Indiana's work entitled Robert Indiana: Beyond Love which originated at the Whitney in New York. It was remarkable to see such a collection of his work, and the exhibit completely changed my mind about Indiana.

To be honest, I had never been a big fan of Indiana's work, and like many others, I often dismissed his work as rather shallow and naive. I was definitely mistaken. Though Indiana is widely known for his iconic "Love" image which has become ubiquitous and has been featured on everything from t-shirts to key chains. Indiana never licensed its use, and never made money off of all the commercial products bearing the image. Indiana also never went after those that illegally used it, and the image spread. Like many others, that is how I knew Indiana, but as I spent time in the exhibit, I came to the realization that his work was much more complex and much darker than I had suspected. Though his brightly colored hard edged paintings conjure up images of road signs, arcades, and midways, his work often has a political undertone or personal narrative that drive the work.

If you are in the San Antonio area, I highly recommend a stop at the McNay to see the work of Robert Indiana. I am grateful for the opportunity to be part of such an extraordinary exhibit.
Posted by Eric