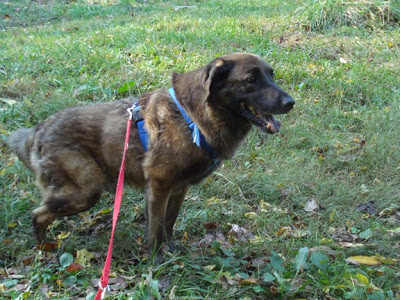 We said goodbye to our sweet, three-legged shepherd/chow mix, Percy, last night. His health had been going downhill for the last few months, and helping him end his suffering was the only humane thing to do.

Percy came into our lives more than 11 years ago, and filled them with such joy. Before we adopted him, he was left with a fused back leg as a result of being hit by a car. Although his back leg was fused straight and virtually useless, it never slowed him down. The countless groundhog, rabbits, and squirrels that he chased and hunted down in our tiny backyard was a testament to that. After several surgeries to try to get his back leg workable, we decided to amputate, and Percy was better for it.

He enjoyed nothing more than carrying on in the backyard, and he so enjoyed his furry brothers and sisters especially a couple of cats who were always special to the boy. Percy devoted much attention to our cat Pop, as she would prance in front of him rubbing on him and flirting with him. We always teased that they were an item. Percy also loved playing with Aloysius, our orange tabby. Aloysius, or Squishy as we call him, would flop down in front of Percy and raise up his paws, and Percy would play bite, mouth, paw, and bark at Squishy. They would carry on and on, only stopping when Squishy was covered in Percy drool.

As he aged, Percy's back leg grew weaker, and then not too long ago he was diagnosed with liver disease even though he never showed any outward signs of its advanced state. Slowly it became hard for Percy to walk as his single back leg grew weaker. It started out as mere slipping as he tried to stand or walk on our hardwood floors. Eventually, we had to assist him in standing and walking by grabbing hold of his tail and using a sturdy harness. His appetite became uneven, and near the end he simply nibbled on dry food as he laid in his bed.

Several weeks ago, sores opened up on his feet and elbows. Nothing helped, and we ruled out causes that might be easy to fix. We had to resort to an e-collar (or cone) as a way to keep him from chewing on his sore paws. As the sores on his body became more numerous and as it became more and more of a struggle to stand, walk, and breathe, we made the decision. My wife stayed home with him one last day yesterday as they watched a Harry Potter marathon together. I'm sure Percy thought all the while that he could still take Fluffy, the three-headed dog. We had our last evening with him last night as we said goodbye and were joined by our friend Marcia. In the end our wonderful friend Dr. Krisi Erwin helped Percy peacefully and comfortably go to the Rainbow Bridge.

My heart is heavy and broken, but I know that his suffering is at an end. We will miss our guardian, and the house will seem so much emptier without him. But we are very grateful for having the chance to love our Percy dog.

Email ThisBlogThis!Share to TwitterShare to FacebookShare to Pinterest
Labels: ramblings

I am so sorry for your loss...our pets become such big parts of our families and lives. We had to do just that with our sweet Golden Molly last month. She had cancer...we had already had her beautiful tail removed, and she developed several more tumors. She was 13 and we just could not put her through any more...it's a hard and painful decision.

Peace and comfort to you and yours.

I know exactly how you feel. We had to put our dog down on Wednesday too. We had been away because my husband had to be flown to a hospital in another city because of a suspected heart attack. She hardly ate or drank all week. When we got home, she ate and drank, and was even jumping around. But when she shook, she would knock herself over. When we took her outside her back legs gave out. On Wednesday morning, she had two seizures. She had one just over a year ago. Her illness has been getting more severe like your dog. So, we also had to make the very hard decision too! She would have been 18 this year. Pretty good for a farm dog. We keep expecting her to come around the corner, and bark when we arrive home. Today, I could have sworn I heard her gentle, little whimper as I was seated at the breakfast table. I know it was the wind whistling through the window, but it sounded exactly like her. Who could imagine a stray dog could do so much for a family...she was my faithful companion for 16 years, when I explored the country side taking photographs , she was always there. She helped me to be brave and explore and to be able to walk in the dark at night when the coyotes were howling! Take care. You are not alone!

Mary and Renee, Thank you for your kind words. It is such a comfort to feel your support.

After being in relationship with Wilson for seven years,he broke up with me, I did everything possible to bring him back but all was in vain, I wanted him back so much because of the love I have for him, I begged him with everything, I made promises but he refused. I explained my problem to someone online and she suggested that I should contact a spell caster that could help me cast a spell to bring him back but I am the type that don’t believed in spell, I had no choice than to try it, I meant a spell caster called Dr Zuma zuk and I email him, and he told me there was no problem that everything will be okay before three days, that my ex will return to me before three days, he cast the spell and surprisingly in the second day, it was around 4pm. My ex called me, I was so surprised, I answered the call and all he said was that he was so sorry for everything that happened, that he wanted me to return to him, that he loves me so much. I was so happy and went to him, that was how we started living together happily again. Since then, I have made promise that anybody I know that have a relationship problem, I would be of help to such person by referring him or her to the only real and powerful spell caster who helped me with my own problem and who is different from all the fake ones out there. Anybody could need the help of the spell caster, his email: spiritualherbalisthealing@gmail.com or WhatsApp him +15068001647 blog: spiritualherbal.blogspot.com you can email him if you need his assistance in your relationship or anything. CONTACT HIM NOW FOR SOLUTION TO ALL YOUR PROBLEMS